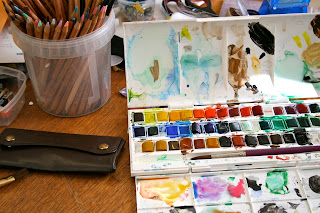 My plan for the day was to give as many of the sketches as possible a watercolour wash and whilst the pages dried I would make some other images using free machine stitching. I have gone back to the Shift dress as the source of my ideas. However I'm taking a much more personal approach, since my twenties I've been overweight. A couple of years ago I managed to lose a considerable amount, but last year I lost the plot again. How foolish, how self-destructive you might think, it was a stressful year, there was very little work and a lot of demands placed on my shoulders. Everything was a struggle and I just couldn't exercise or count calories for a moment longer. 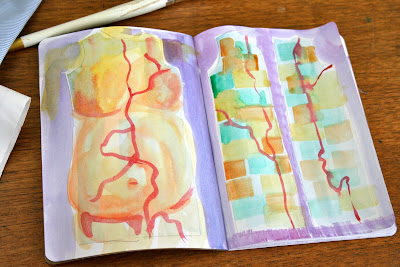 When I started thinking about the shift dress, I could probably still get away with wearing one, but now my body is running away from me again. I am troubled by my body, how to look after it, how it is worn out and falling apart. Even when thinner, this fact was inescapable. The Shift dress has power because it is a simple shape. I have always longed to be a straight line able to inhabit a simple shape.  I long for freedom of movement. I don't fit. This first image is something about feeling uncontainable.

See also the Milan Kundera quotation from The Unbearable Lightness of Being which starts "The heaviest of burdens crushes us, we sink beneath it, it pins us to the ground........." 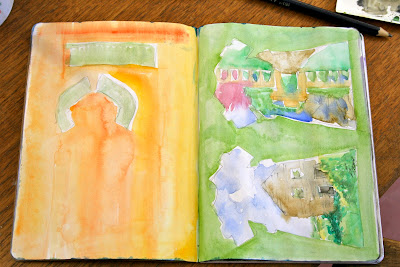 Here are dresses that contain memories of a place I long to be - I find I would love to be able to wear the landscape. 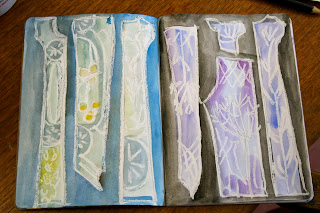 These are a combination of shapes from 1960's pattern pieces and things seen along the Brampton Valley Way. I also laminated small pattern pieces which were made from maps, stamps and photographs, these will also be going into my sketch book. 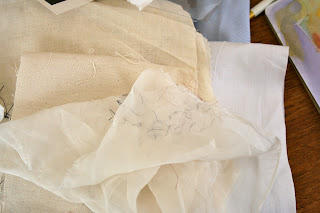 Fabrics sorted and paint drying I attempted to start sewing, but my machine was having none of it. I did get some stitching done but not as much as I would have liked. I went to see if the only local sewing machine repair man could help, only to find that he'd sold the business and moved on without letting anyone know. The lady in the Florists next door wondered if he'd been one of the group who had won the lottery recently!

It might take me some time to get going, but once I do, I'm very determined. I took my machine home and asked 'the man who can' to undo the bottom of the machine and see if the works were clogged up with fluff. We found plenty. Machine attended to I started sewing again, but there was still a problem with the shuttle and the tension, threads kept snarling up. A very tiny piece of plastic has worn away or broken off and it's amazing to find that something so small could cause so much trouble! I did manage to coax enough decent stitches out of the machine to complete the samples I wanted to make. Then it was back to painting.

"weight |wāt|noun1 a body's relative mass or the quantity of matter contained by it, giving rise to a downward force; the heaviness of a person or thing : he was at least 175 pounds in weight.• Physics the force exerted on the mass of a body by a gravitational field.Compare with mass .• the quality of being heavy : as he came upstairs the boards creaked under his weight.• a unit or system of units used for expressing how much an object or quantity of matter weighs.• any of several divisions based on relative lightness and heaviness into which boxers and wrestlers are classified for competition.• the surface density of cloth, used as a measure of its quality.• Printing the degree of blackness of a type font.

2 a heavy object, esp. one being lifted or carried.• a heavy object used to give an impulse or act as a counterweight in a mechanism.• a burden or responsibility.3 the ability of someone or something to influence decisions or actions : a recommendation by the committee will carry great weight.• the importance attached to something : individuals differ in the weight they attach to various aspects of a job.• Statistics a factor associated with one of a set of numerical quantities, used to represent its importance relative to the other members of the set." 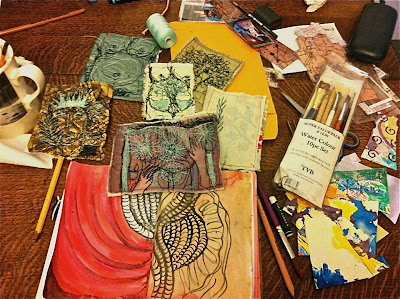 Here is the dining room table after day two's activities.