I love Artist Multiples, small, portable pieces of art that give you a hint or a flavour of an artist's work. Over a period of time I've been developing some Multiples of my own, the most recent being a series of images printed onto seed paper and presented using old postcards to create the package toppers.

The postcard was from Open Places Open Spaces in 2003 - an early digital image called Primavera which features, amongst the layers, buildings from Northampton town centre and a friend spouting flowers from her mouth.

The seed papers contain a mixture of wild flowers and after soaking can be planted. I'm doing a test at the moment and have planted one of the images to see how it grows. I'm calling these multiples "The Seeds of Change" and they are currently available at Longdogs Bazaar on Etsy.  They are £5 each with free postage in the UK or three for £10 plus postage. They are A6 size, light, easy to post and make a nice gift! All the digital images are also available in other sizes and on a variety of supports. 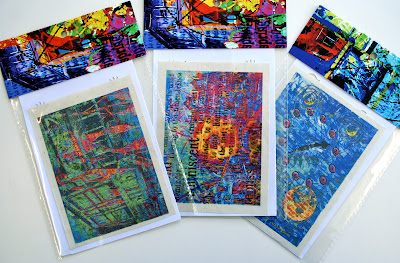 This set feature images which combine buildings and plants / weeds seen sprouting in, on and around buildings 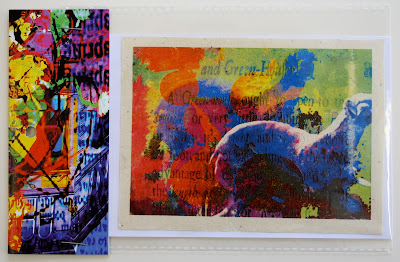 This image contains images of my first whippet, Shelley, bounding about in Wickstead Park 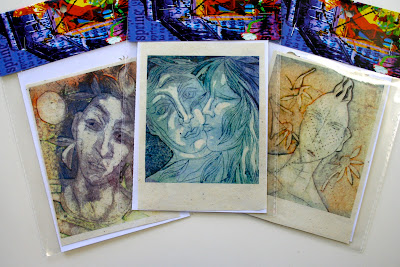 These are reproductions of older collographs - an original print of Willow Woman (in the centre) plus two other green Man inspired pieces are now part of the IOTA Collection. "Based in Glasgow (Scotland), IOTA is a private research collection of representations of the green man. IOTA seeks examples from all periods and from all cultures"

During the mid 1990's I was very inspired by the writer Angela Carter and intrigued by one of her stories The Erl King, so began making a series of images with people being seduced into the woods by an enigmatic character with branches or leaves sprouting from his head. I also started making smaller collagraphs and the Green Man /men / women with sprouting heads began to appear. It also coincided with a firm belief that we need to take more care of nature, so many green spaces are being eaten up by housing and industrial units, we need to look after what is left. 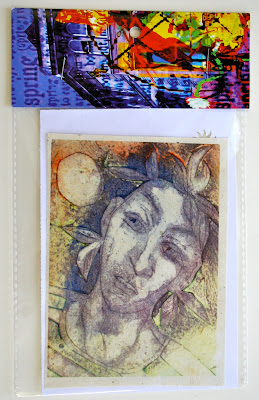 Last year I made The Sweet Smell of Success - a Limited Edition of 30 silk lavender bags, each with a distressed digital transfer print on the front and filled with English lavender 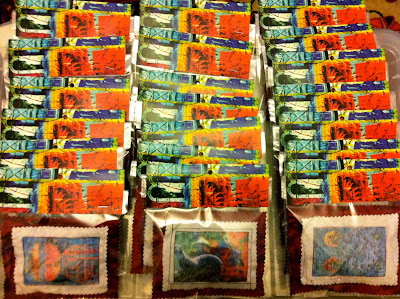 The remaining few are also available  at Longdogs Bazaar on Etsy. 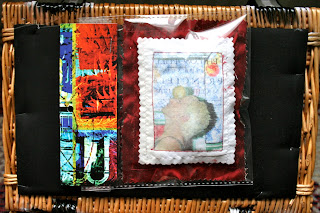 I have put a few small framed prints up for sale 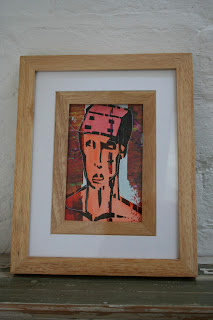 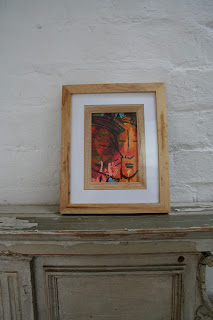 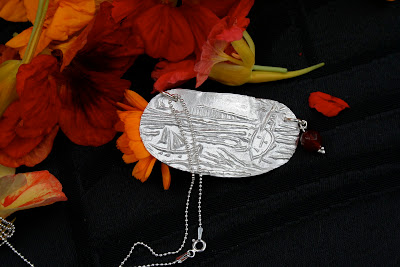 and there are still a few pieces of my second jewellery collection left. The collection was developed after making a piece of work for the second Held in the Hand collection - part of the innovative  Held in the Hand and Touch Tables projects initiated by Leicestershire County Council Heritage and Arts Service. They, along with 9 other major museums have been longlisted for the second annual Clore Award for Museum Learning, which recognises quality, impact and innovation in museum learning initiatives. The New Vistas / Wider Horizons Big Draw project I developed with Back To Books last year was shortlisted for an Epic Award and for a Drawing Inspiration Award.
Posted by Carole Miles at 11:08