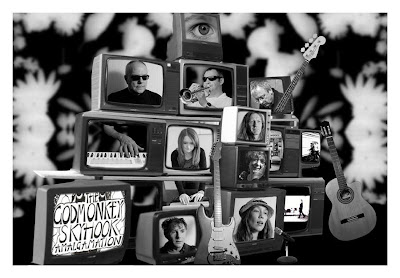 It's been a busy few months for the Godmonkey Skyhook Amalgamation, we've had quiet rehearsals in Mark Brennan's front room, honing Lifecycle and trying out some new ideas. We've also had cold rehearsals at Adrenalin Alley and loud rehearsals in a studio setting. It has been fascinating being part of a totally different creative process and I'm awed and excited by how talented all the musicians are. I add a voice, some visuals and a way with words to the mix and am loving the chance to sing and contribute as part of this group. 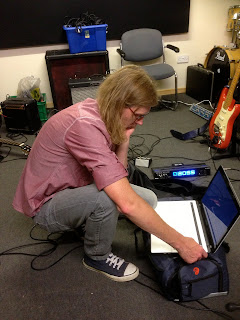 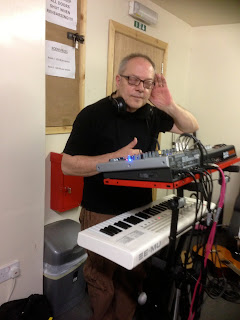 Man of many sounds and much electronic wizardry
Martin Baldock wondering "Can I get a sound check?" 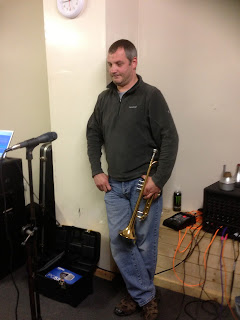 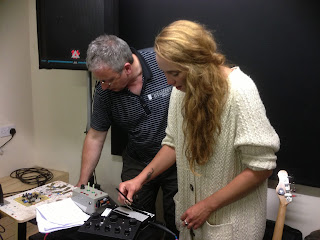 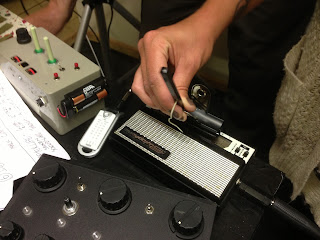 exploring the old school delights of the Stylophone played in inimitable Eathorne style with the aid of a bullclip!  You can see just some of Andy's wires and gadgetry below! 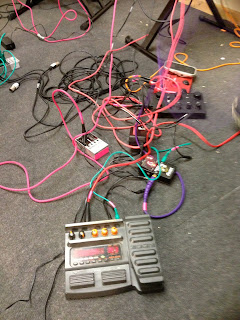 We had some recording time to work on Lynn's beautiful rendition of Nick's song Inside Out, which will be available on Mark's Deeds Not Words CD - due for release at the White Ark Festival in Coronation Park in August. The festival will feature a wealth of Corby's musical talent and should be a great event. 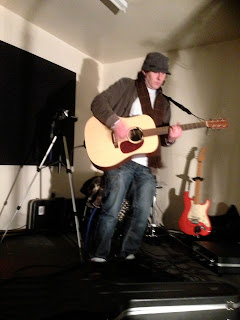 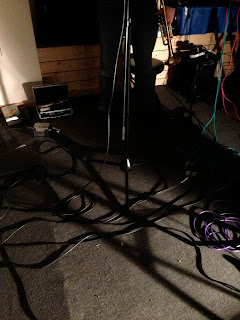 We were also rehearing for our gig at The Willow Festival in Peterborough. On the day of our performance Andy and I arrived a couple of hours early, not quite as early as Martin though. It gave us time to explore the Festival site, I fell prey to a new red hat and Andy bought a teeshirt, Martin didn't find any new gadgets! Because we were performing during the day, in the open air we were unable to use the projection part of our performance but in his intro Nick dedicated the performance to our VJ Cindy Clipston. We hope to share the full Godmonkey experience in our next gigs at the White Ark Festival and in Northampton at the Umbrella Fair - details to follow soon! 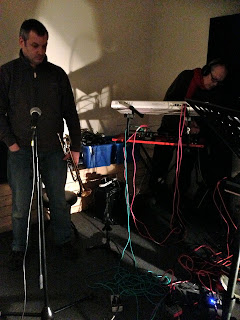 Some thoughts on the set

My impressions of Lifecycle is that it's a journey with a loose narrative structure pausing at various points in a life rather than a collection of songs.

We begin with "Embryo" a gentle introduction to a new life, Lynn and I sing a kind of abstract lullaby inside the music which has a watery, dreamy feel.

Next comes the touching song,  "In Your Eyes" with Nick on lead vocal about the connection of parent and child in that first moment of recognition " I see life, all of life, in your eyes, beautiful eyes".

Followed by "Chaotic Child" which expresses the rumble and tussle of a busy, active, rumbustious child, it's energetic and a bit noisy and I guess this child may turn out to be creative as she's adamant she wants her pencil, wants to be drawing, writing, making a mark and is impatient to be getting on with it.

"Inside Out" is hauntingly beautiful, full of longing, regret and hope, Lynn's vocal, Darren's trumpet combined with the guitars, synths and chaos pads give this an eerie, alone in a room on a Sunday afternoon quality.

Then we have "Rant" inspired by some of Mark's writing and delivered in edited form by me, it's a loud, impassioned piece with a driving beat - state of the nation meets desire for a greener, less materialistic world and, as you would expect with protest/rebellion, some shouting.

"Death" takes us to that moment before passing and there is a moving pause, the last beatings of the heart, the last reflections on a life, the Darren plays The Last Post which transmutes into "Afterlife".

"Afterlife" seems like all the particles of the self disintegrating and flowing out into the universe, joining with all those other particles of life, time and experience. We whirl out on some enigmatic sound spiralling from Martin. 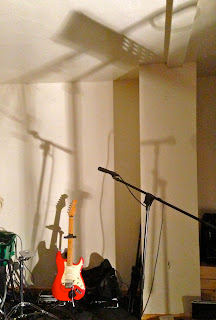 You can see a variety of images from the Willow Festival on the Godmonkey's Facebook page we had a great time, the guys were great, being on stage, out doors, in broad daylight felt strange but exhilarating. Having seen a brief video clip I'm not sure if you could hear me too well but I'm still learning! Great to know it's never too late to try something new! 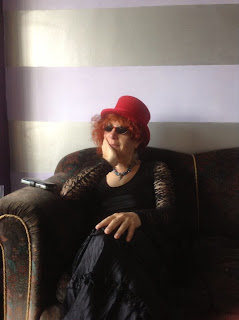