The Last of Autumn 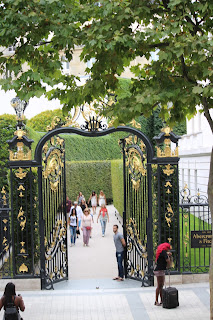 After sewing the dry oak leaf bowl for the Miles and Dacombe Flavour Exchange walk intervention in Birmingham I have been collecting other dry leaves without a clear idea of what i might do with them. 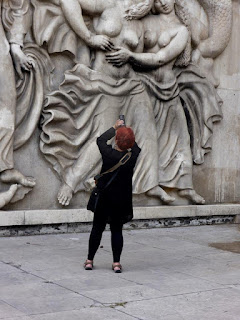 Whilst in Paris last August I noticed how dry the city was, the fountains were still, the leaves seemed to have fallen very early. I collected some large grey green leaves and left them to dry in my shed. 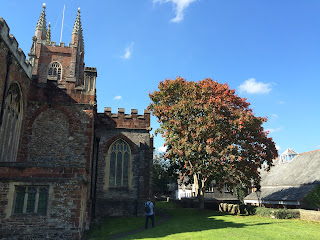 In September, whilst exploring Totness I collected in a church a larger number of leaves, delighted and intrigued by the vast choice of colours, flame red, green/red, grey/green, toasty brown, gold, ochre, some already crispy, others softy and supple. I wondered how long they would retain their colour. 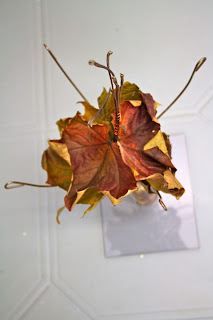 So far my collecting had given me leaves of a similar type - the theme continued as i tryed to collect some of the tiny deep red Acer leaves from my garden - they crisped and crumpled away to practically nothing. However, whilst working in Northampton there were heaps of a different leaf shape (you can see how I am now dodging naming the exact trees, my leaf identification skills are pretty poor). These leaves were string, flat, rounded and came in a good range of colours, so I scooped up a bagful and took them home, still not really knowing why. 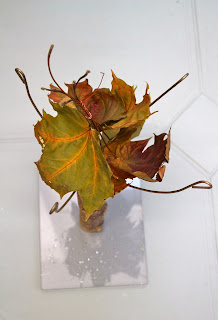 I had a thought about adding lights and putting them inside a glass dome, but during my kitchen studio antics for the NYB16 "Nature as a material for art" I broke the dome and decided that whole idea was pretty clichéd, so left that. As I am still trying to make things from things I already have rather than accumulate more things I cannot store I decided to repurpose the stands that had been used in a Brampton Valley intervention. I found some copper wire and decided that instead of sewing another bowl or embellishing a garment (done, done, done) I though I would use the aspects that made them hard to sew together - their dryness and the long, tough yet elegant stems. 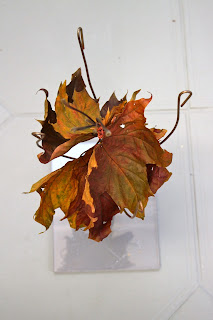 I wanted to try an capture that sense of falling
I wanted to enjoy the colours, 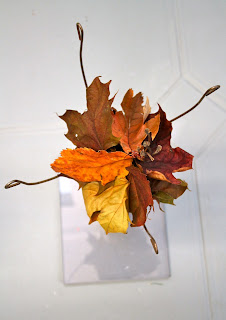 the textures and the fragility of the leaves. 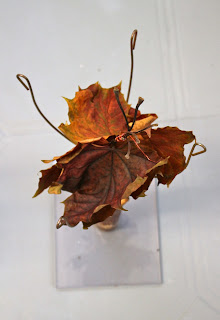 wrapped with wire, embraced by wire,
reflected in acrylic and supported on plum wood. 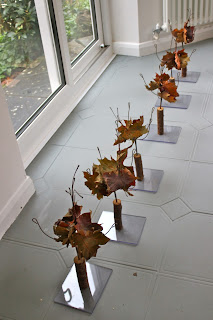 I had to be gentle working with a material that could be so easily crushed and destroyed, I ha to be careful not to do too much, just let the leaves decide on their shape and form, then wrap quickly in the copper wire. I like the sense that at any moment, wind or motion could alter or undo the leaves resting places and yet somehow they also remained strong. I liked the interplay of impermanence, strength and fragility, that they were an avenue of not trees. The colours were disappearing but there were faint traces of their autumn fire. All the bases should be in the same orientation, but one has been moved, I have just noticed this and it bothers me. I can't go back in time and change it, put it right, I have to accept that memory and actuality differ, are imperfect. 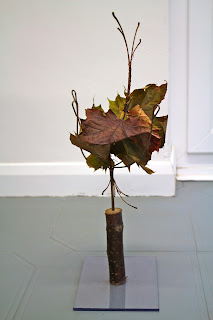 This piece is about time and place,
lightly caught and held. 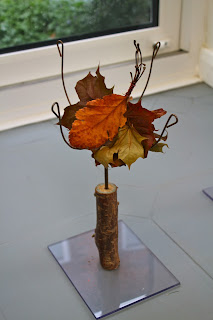