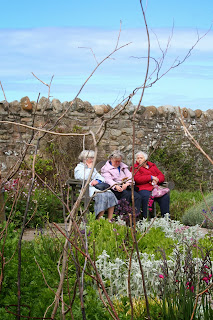 Last year we went to Northumberland and I fell in love with the people, the space, the wildness, the mystery, the landscape, the history. We were staying in a property next to Brinkburn Priory, we had a glimpse of good weather on Lindesfarne and the Gertrude Jeykyll garden lying almost incongruously in the field behind the Castle captivated me. I knew I had to come back and explore the area as an artist and thanks to Back To Books it was possible to return with Jo Dacombe and Kate Dyer on an arts and walking residential. We will be talking more about our joint experiences and findings on December 5th at Cranford Village Hall. (See previous post) 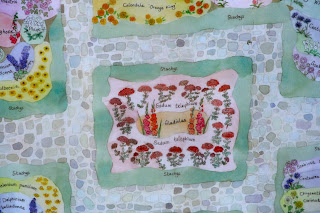 We each brought an activity or inspirational item (in my case I bought a bag full as I am useless at minimal anything, particularly packing!) - Kate brought each of us a book and on arrival we sat on the sunny terrace examining them. Mine was "The Hare With Amber Eyes"chosen for me because I am a collector. I understand the dialogue of hand and treasured object, know the passion that can grip a collector on the trail of a much desired artefact. I'm an incomplete completist but not really a displayer and many fear I may turn into "the hoarder next door. Slowly I am trying to filter, use or disperse things I can bear to part with, this may take me quite some time! 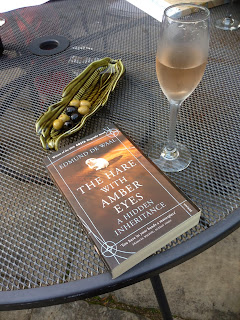 Aside from our joint tasks and observations I had also arrived with some pottery shards - Spode Trade Winds - with the intention of taking an imaginary tea with Getrude Jykyll in her Lindesfarne Garden. 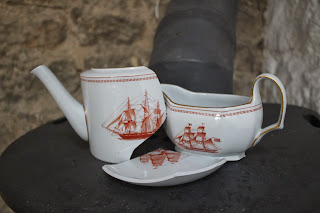 Why Spode - I have family in Stoke on Trent, a large collection of domestic tea ware and a huge desire to make something about the connections and ties this creates.

Why shards, because even when something is broken it still has beauty and potential, like the potteries.

Why Trade Winds, well I happened to find some large broken pieces when sourcing shards for a mosaic project, the shapes were too compelling to break so I kept them. The fact they were made for the export market and that each had an engraved transfer of sailing ship tied in with a long seam of sea inspired imagery, thoughts and family connections.

Why Northumberland, because there are such strong ties with archaeology and it is the pottery shards in the spoil heaps that help date the site and give clues to the lives of and people who held those everyday items.

Strangely at the time I was romping round the North and South with pieces of broken china in my backpack artist Kate Lynch was in the Spode Factory, during the British Ceramics Biennial asking people to think about how the ceramics industry / society could be mended during her Helping Hands activities. I did not know, prior to my trip, that she would be doing this. 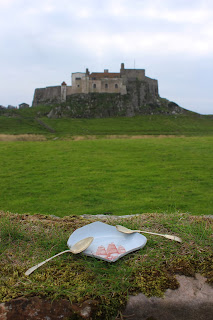 I also took some spoons. 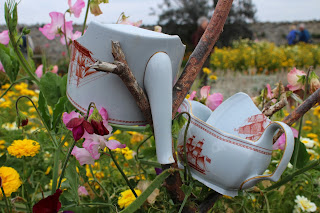 Lindisfarne was still busy, the Jekyll garden was full of visitors and I discovered that it was quite hard to interact with a space, using curious props without attracting attention, so I thought I'd just run with that and invite people to join in and lend me their hands. 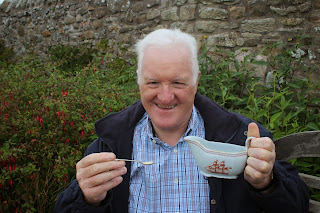 Here is my first volunteer who really enjoyed the interaction. I have a large body of images taken of people on my travels in Northumberland and then in Cornwall. I am tempted to try and fit in East and West and possibly Salt Spring Island where I will be visiting next August but I'm not sure I'd be allowed to carry pottery shards through customs. 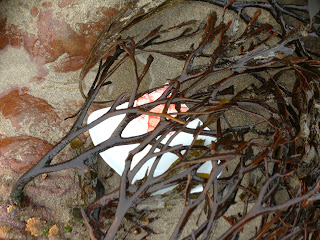 A week later and I was in Cornwall - South. My time in Cornwall was supposed to be a holiday but my brain just wouldn't switch off and I was probably a bit of a nightmare to be with. I could not resist taking my shards out and about with me and people were so lovely, so pleased to be involved, on the beach, walking the cliff path. We were taking a sentimental journey home via Jane Austen's house and I had hoped to tie things up at there. Thought I ought to ask permission and it was here I encountered my first resounding "No" the No Entry sign on the gate seemed like an omen. 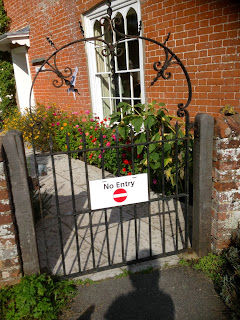 The tills weren't working so I couldn't buy a ticket as I had no cash and the powers that be were adamant that I couldn't continue my endeavours without written permission and even though I accepted the decision and understood why I felt locked out, obstructed, doomed! 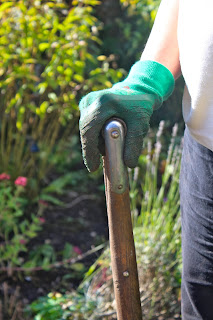 However they did let me in to explore the garden in the hopes that the card reader would start working before I had to leave. I was beginning to think that this place would keep me at bay for a second time. I went out into the garden in search of the vegetable patch which had inspired me to grow the Painted Lady Runner Bean on my previous abortive visit. The patch was gone, I met the delightful Head Gardener who told me rather wistfully, that it was under the new education building and that it was now getting harder to find Painted Lady beans to plant. 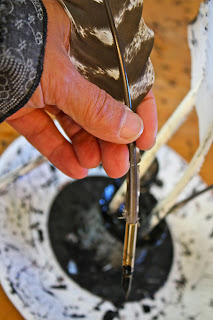 We had a long conversation about bees, Zinnias, Tagettes and Love Lies Bleeding and I began to relax and enjoy the possible. I did get to explore the house and decided that what I had hoped to do wouldn't have worked anyway as there were so many artefacts forming the story of the house what I had brought would become invisible. As instructed, I wrote a brief letter to Jane. 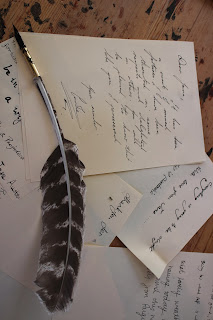 I raised a broken cup from across the road. 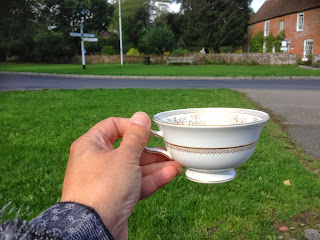 At home I made a multiple 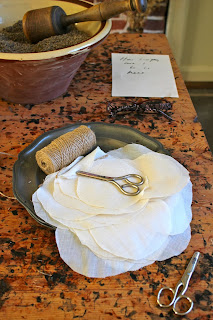 for those that remotely walked 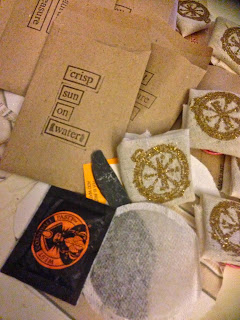 South with me during the week 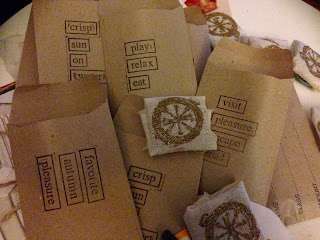 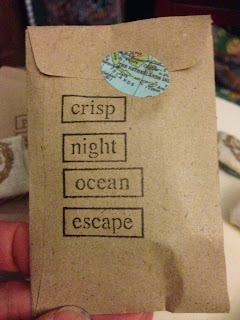 Later in the week I visited some friends, a potter and her husband who collects Netsuke we chose a toad with a much stroked belly and ended at the beginning. 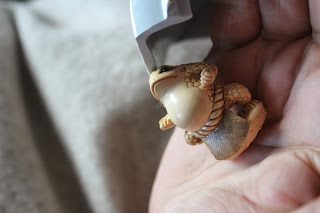 I'm longing to share the works I made, but that, I expect, with involve another, more convoluted journey!