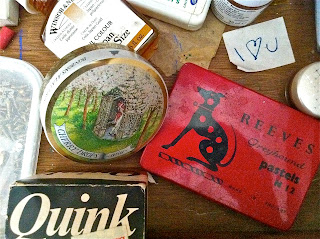 I had hoped to write this for St Valentines Day but got tangled up in lost photographs and a missing poem. Whilst implementing mouse defences in the studio I came across part of the poem applied to various pieces of old work, so here it is, some thoughts on time, gravity, aprons, apples, temptation, experimentation and love.

Towards the end of the last century I found I was becoming troubled by my own working processes,  to some extent I am still torn and inhibited by the same conflicts - the desire to make something with materials that touch an actual support and the desire to use photographs, text, found images and digital manipulation to create images.

I had been involved in a school project which led to an afternoon spent at Newton's house, Woolsthorpe Manor. Newton's apple led me to an Apple Day event at Kirby Hall. There were many old and strange looking apples with wonderful names and terrible complexions. I have a very strong suspicion that the social historian Ruth Goodman was demonstrating how apples were used in bygone kitchens.

There is something so evocative about an apple, I remember being a child in the school playground with a wonderful crisp red apple, children were rushing this way and that but I was lost in my own version of Snow White. I had just taken a bite from this most delicious apple, when I tripped over my own feet and the apple fell to the ground, ruined. 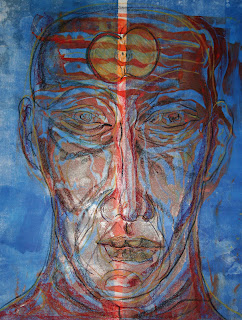 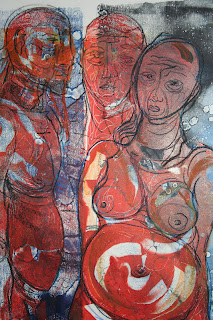 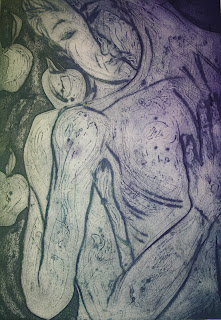 In 2000 there were a series of workshops to encourage artists to apply to the Arts Council for one of the 1000 small grants to celebrate The Year of the Artist which took place between June 2000 and May 2001. Through a strange set of circumstances I found myself creating new work, in new ways at the Castle Theatre, Wellingborough in collaboration with artist Ruth Rignall and dancer Sam Ingram. For the Year of the Artist we called ourselves Pulling Together. Taking gravity as a theme, Pulling Together set out to explore the complex relationship between science and the human heart.


“Newton's apple, hurtling through space reminds us of the apple from the tree of knowledge, reminds us of how fast we are traveling in terms of science and technology. Our thirst for knowledge is often more pressing than our fear of the consequences, we tend to be equally fearless/reckless in terms of our emotions and our relationships. As artists we are driven by the passionate pursuit of ideas, as individuals we strive to find people who will offer us love, help, support or just a momentarily still point in a turning world.”

"We spent 10 days between April and May 2001 working together at the Castle on a performance piece incorporating these themes........... 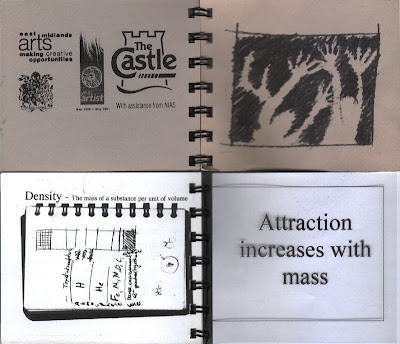 The nearer you are to something the more you feel it's gravitational pull - this effect fades at a rate expressed by the Inverse Square Law." Ruth Rignall - Gravity Booklet

This led to the creation of a textile piece / costume known as "Sleeve", a tubular garment made of materials that move through the spectrum of heavy (dense) to gossamer (fine). This could be worn in various ways and contained our thoughts on the Inverse Square Law. "

The interesting thing about this piece is we created without knowing we were describing density the diagram above, which made sense of our artifact, was drawn by Dr Matt Burleigh - it was one of those 'aha!" moments. We weighed every piece of fabric. 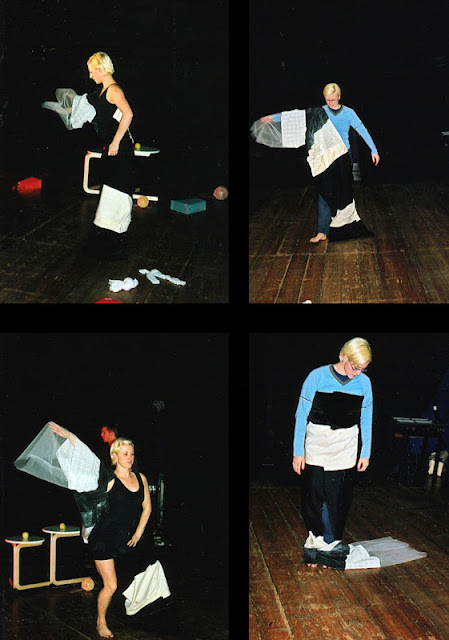 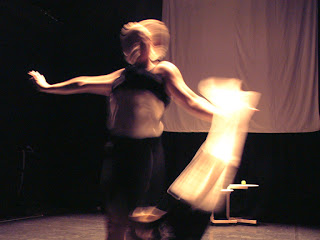 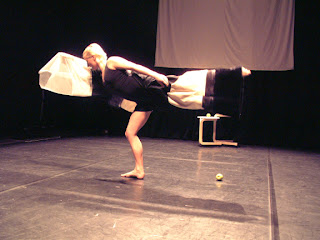 We decided to take something domestic, the apron, as a device to pin our ideas about time, space, gravity and motion on; seeing parallels between kitchens and laboratories. We had three layers of apron for Sam to dance in, plus a host of bags, balls both string and felted and at one point she begged us not to make any more props for her to work with! The first was a pin striped suit apron lined with red, covered in pockets and stamped with useful scientific facts.

"Apron
Attraction Accretion
The gathering of mass,
and its potential energy.

Mass is not the same as weight,
weight is a measurement of the
downward force of mass i.e.:
it relies on gravity - in space
you are weightless
but not without mass

It is possible to defy gravity i.e.:
make things go up not down,
by expending energy." 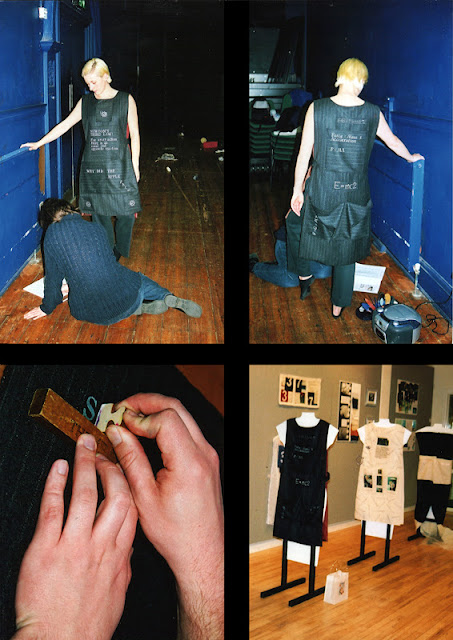 With the suit apron we wanted Sam to embody attraction, accretion, the gathering of mass and it's potential energy. For this section of the dance we had The Apron Sound Score specially composed by Phillipe Vandenhove. 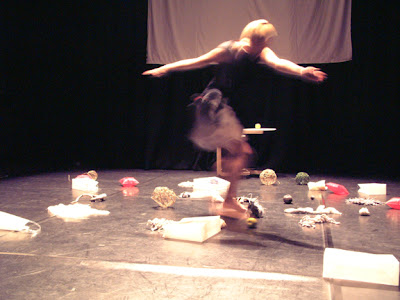 
The second layer was a calico apron, lighter, less about the heavy world of work and much more about entropy, the front of the apron stated that the study of gravity was the study of motion. 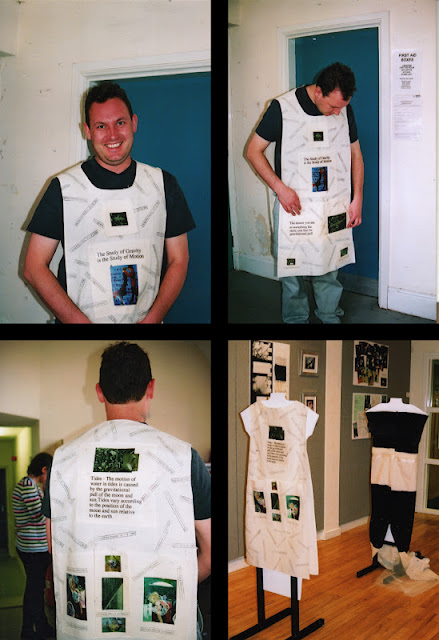 
The final layer was an organza apron. 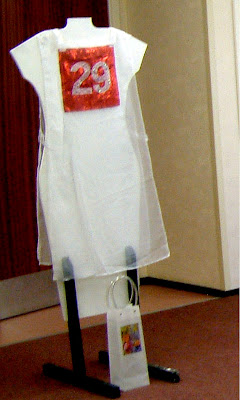 "Underneath the Apron....
Redshift / Blueshift

Movement as an antigravity device!

Gravitational redshift: thanks to
Einstein's General Relativity,
an object with an extremely
high gravity will look slightly
redder than expected." 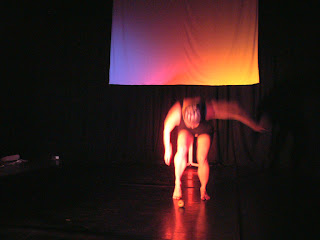 To the Edge of the Earth - Michael Nyman

During this project I started making digital images and my early attempts, as you can see, are quite basic. These were applied to the calico apron, framed as prints and projected during the performance. Both the images and the collaboration were the start of a radical shift in my practice and were a taste of a much longed for freedom. I also started working with fabric and learnt to make felt balls under the expert tuition of Heidi Street Ward - both felt and fabric have played quite a part in my working life since then. 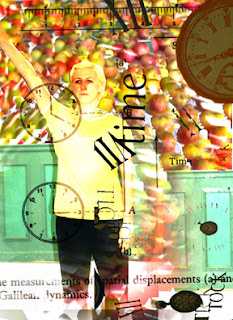 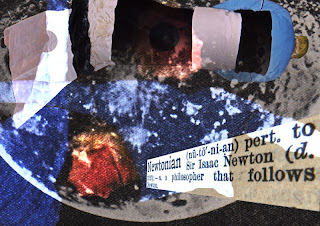 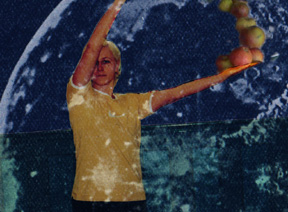 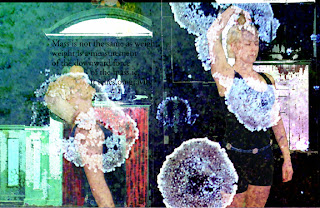 Never could resist lichen on a headstone! 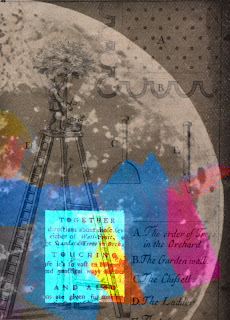 The image above and below were later reworked, with more layers added. The one above also became part of other images - I love this process of taking something from one image and building it inside another. 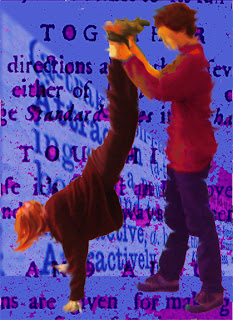 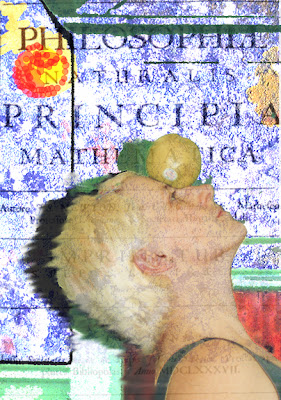 Gravity, love
An invisible
Force urging or
Pulling together.


The call of skin,


Of heart and mind.


Free falling,
Longing to catch
Each other.
Posted by Carole Miles at 16:56

Email ThisBlogThis!Share to TwitterShare to FacebookShare to Pinterest
Labels: apples, art, dance, gravity, love, motion, The Year of the Artist