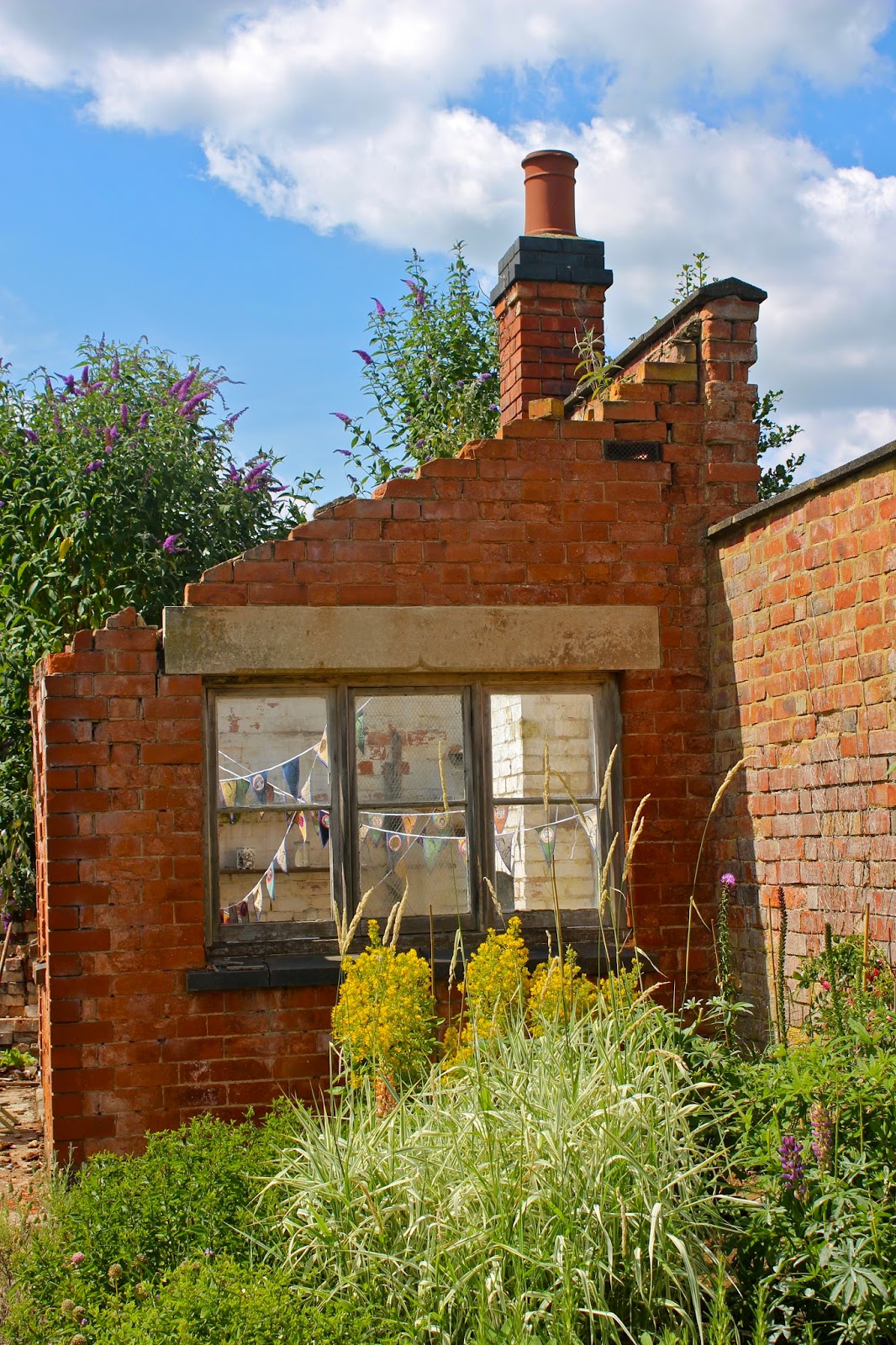 In July I was invited to stage a Micro Residency at artist Susan Williams Artspace. The we had discussed the possibility of making a temporary installation in during the Sculpture Network New Year Brunch January. I was intrigued by a building that had been a Victorian brick gardeners building with attached pigsty. As it was due for imminent renovation time was of the essence.

The Residency took place over the course of two hours and you can see more of each piece by following the links to the Flickr Set after each title. 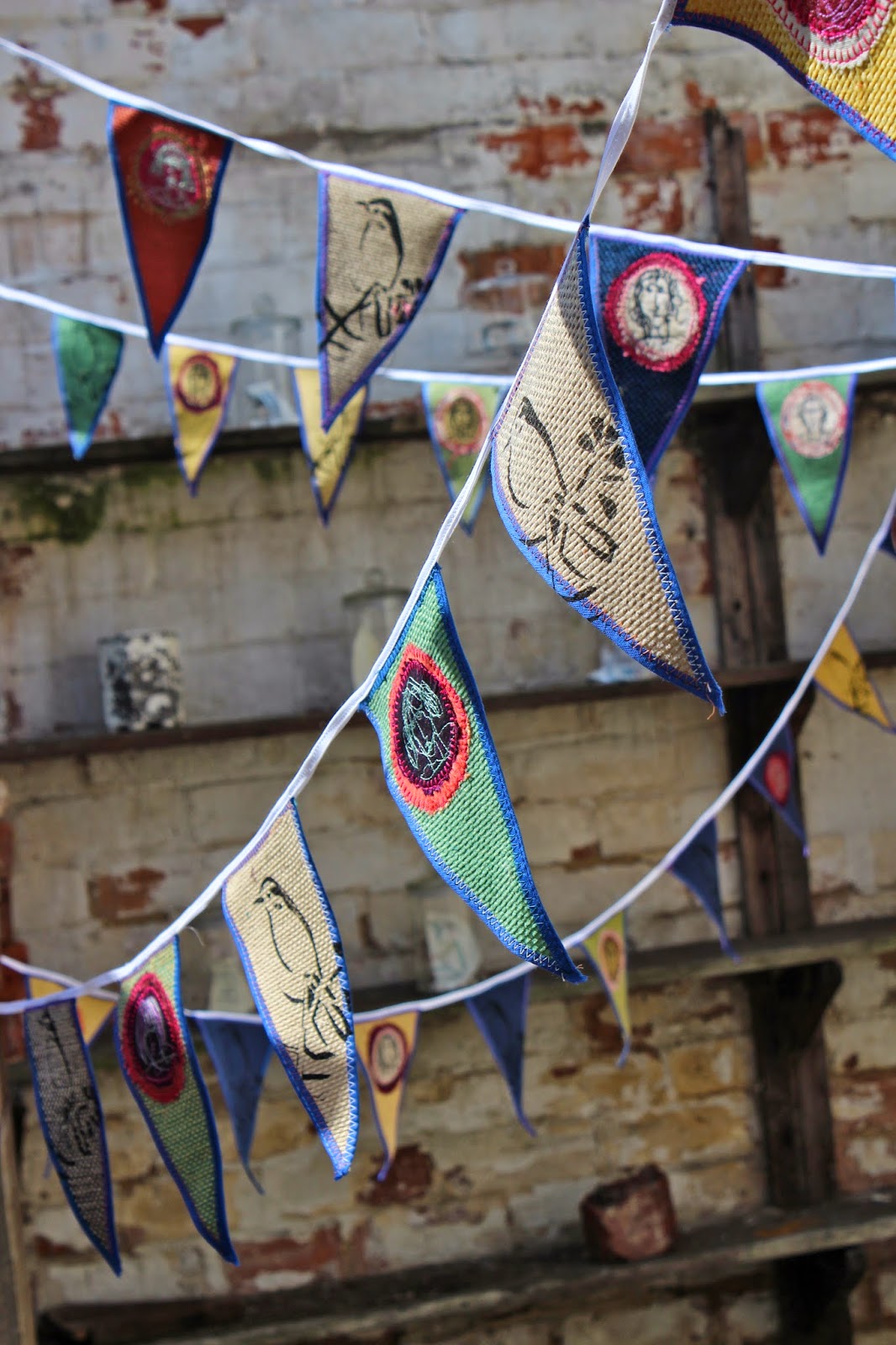 I had already made parts of the piece now known as Baby Bunting, initially for a temporary installation in a disused church.  The Gardeners  Building seemed a perfect space to test out the bunting.

Each pennant has either a screen printed bird or a free machine embroidery portrait of long gone members of an imagined community. They are rural folk, timeless yet touched by the impact of both World Wars. They are present yet missing, gone yet remembered.

Pottery shards in glass jars were placed on the shelves in the shed - preserved damage kept for inspection or protection. The bunting was loosely laced across the internal space and documented from various angles and viewpoints.

Memory, tribute, layers, time, a celebration of life, a reference to our ability to endure, our connectedness and separateness as members of a community are the themes that inform this piece. 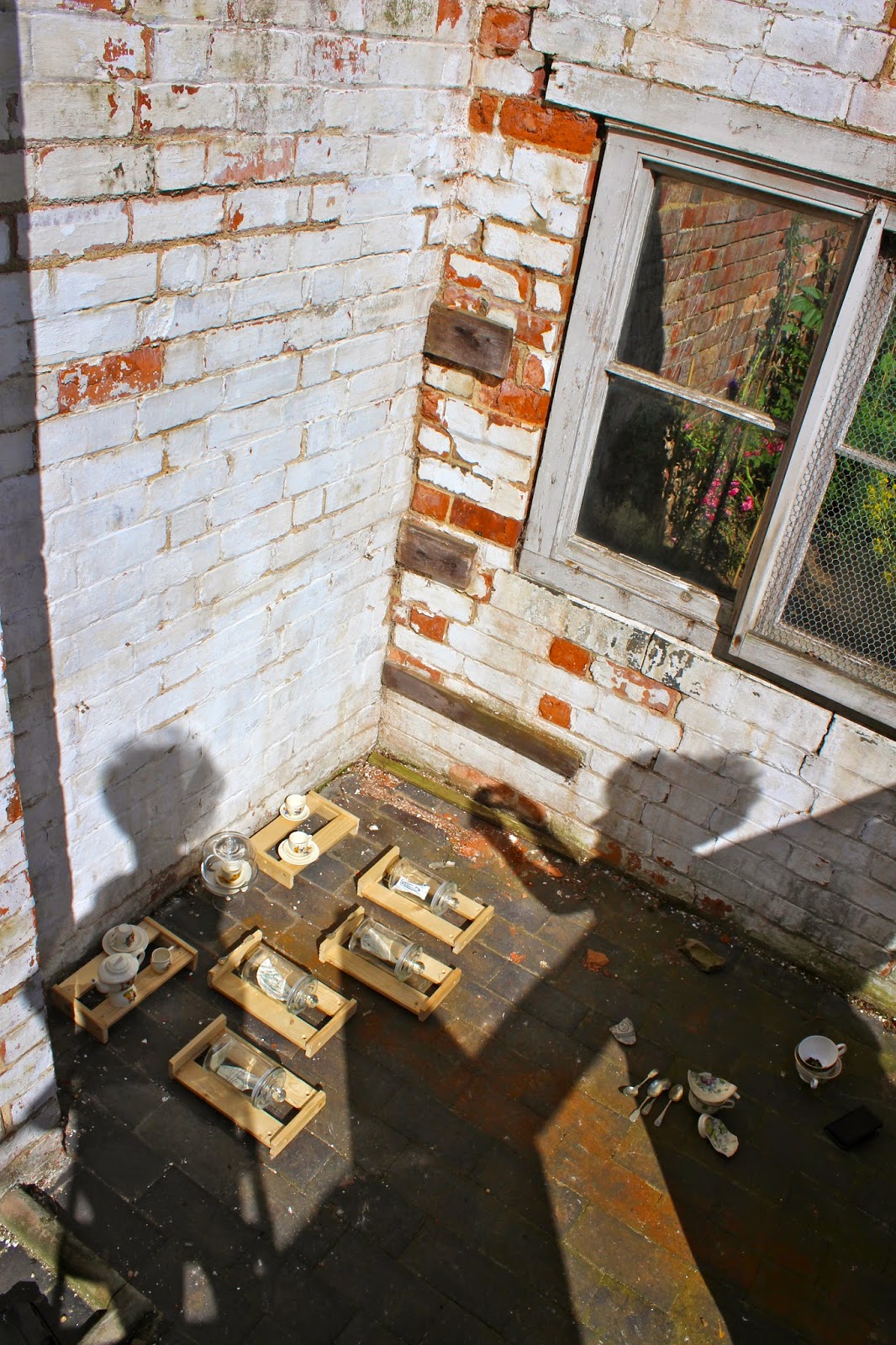 The second piece made was Nursery - utilising the small, rusted fire grate, a vintage child's tea set with original nursery rhyme decals, small bed structures, glass sweet jars, a glass cake cover & stand and pottery shards. During the making two of the tiny unbroken plates fell from their position and this damage in action added to the air of everyday menace. It was also a reminder of how quickly situations can alter and damage can occur. 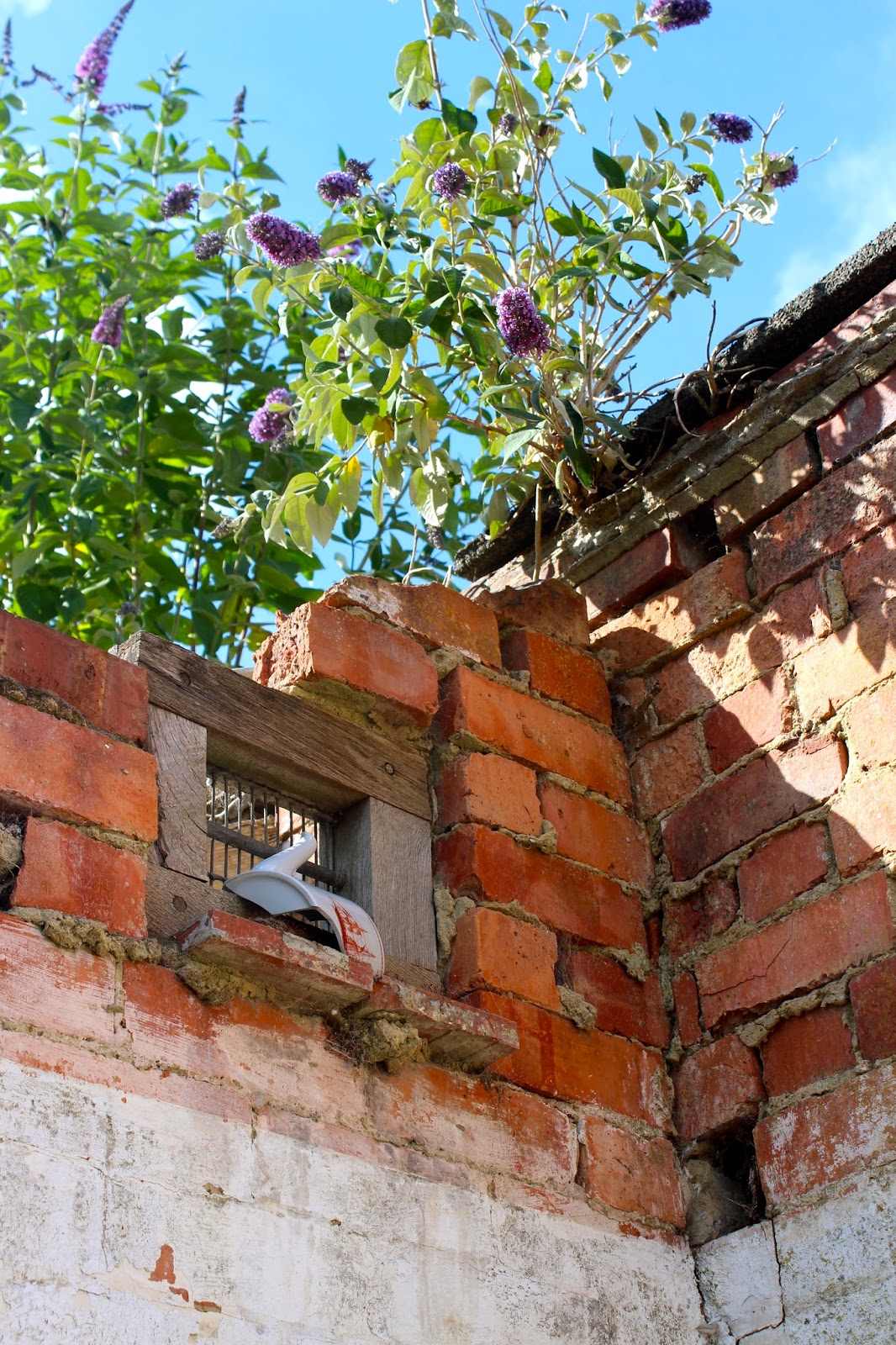 Tea and Trade Winds was a continuation of the travelling Shards Intervention featuring almost complete items of Spode's Trade Winds crockery which had been made specifically for the American export market. It features Tea Clippers and sailing ships and connects with ideas of hame and away, travel and adventure, meetings and departures. The Travelling Shard Intervention was originally intended to reflect compass points but it was relevant to the Artspace Residency as Carole had noticed references to both tall ships and the scallop shell inside the main house. 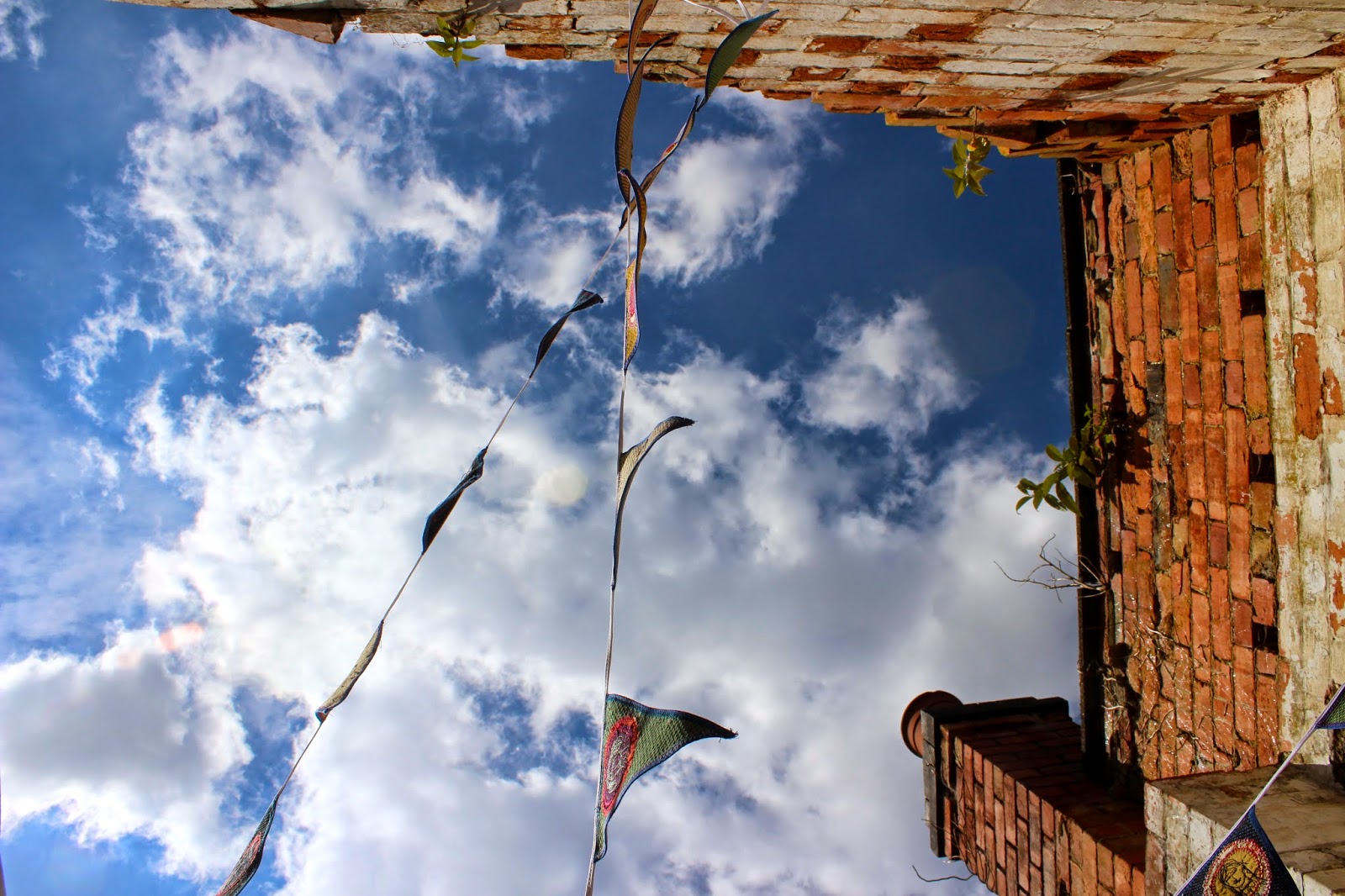 The time to install was short but the thinking behind it was long, happily all the necessary elements came together in this brief moment - space, inspiration, encouragement to create freely, light, weather and energy!

Many thanks to Susan Williams and Artspace making this installation possible. Artspace Residencies are by invitation only.

Thanks also to Carole's Right Hand woman - Maureen Walvin who had the arduous task of sewing binding round the 50 pieces of bunting!