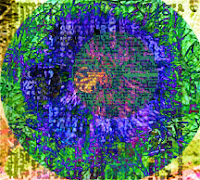 Brought together by Nick Finn, the Godmonkey Skyhook Amalgamation gave their third performance at the Core during the Artists Showcase. The band had wonderful support from the amazing team at the Core. There were a few technical glitches so we had to use alternative video clips to those created by the band, many of whom are also visual artists, many thanks to Millie Beanz for coming to the rescue.

"For anyone who wants to find out what our audio/visual project The GodMonkey SkyHook Amalgamation is all about, Andy Eathorne found the time to film our show at the Core Theatre ,while playing bass and creating huge random noises from his own specially invented machine invented machines, well done to everyone, big team effort !!" Nick Finn

The Godmonkey Skyhook Amalgamation (in low res) at The Core Theatre 01.03.13

We are just beginning!
Posted by Carole Miles at 06:12