24 hours. 1,440 minutes. Or 86,400 seconds.
The Chronicle Project challenged artists to document a single day in their lives and share it with the Art House Co Op community. I had to sign up and choose to create a visual record, describe a day in narrative form or depict my path as a chart or map and limit my focus to a single 24-hour span. Participants were asked to keep track of something specific, like every sound heard, or attempt to capture an overall impression of a day. The only restriction was that the work had to fold down to a size of 4" x 6". The Chronicle needed to be postmarked no later than May 15th and Art House Co Op will be staging an exhibition of the resulting chronicles in the Brooklyn Art Library, in order to collapse 1,000 unique days into one. 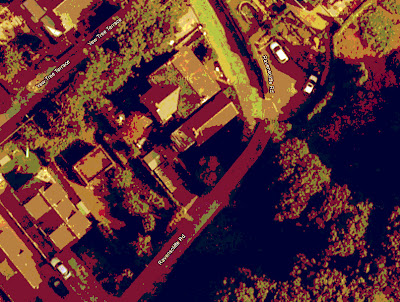 I am flying very close to the wire, I've spent the week planning work, writing applications and trying to make some time to make some work. It's now late in the day and tomorrow we're off to explore Derbyshire. I am supposed to be relaxed, I am supposed to have packed, I am the boring woman who keeps peering up from the computer to say "yep, nearly finished, I just have to do one more thing". This goes on for hours and by 3am there is no one awake but me and I'm just about running with regular infusions of liquorice tea. 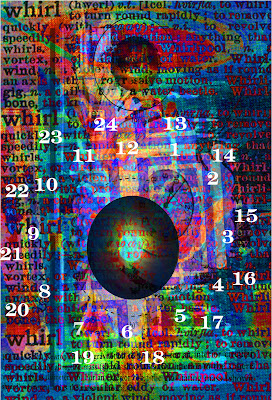 Work changes as you make it, I had planned to use arial views of four significant locations visited during my chronicled 24 hours but in the end I just used one from Kidsgrove as the visit there was the true heart of the day. The image below contains words, numbers and images which not only sum up the kind of 24 hours it had been but capture the feelings I'm having during the making process, Whirl being the most significant! I had intended to use this image to cover the whole of one side of the paper but then got myself in a stew about the toners sticking to each other and the image losing definition once folded. 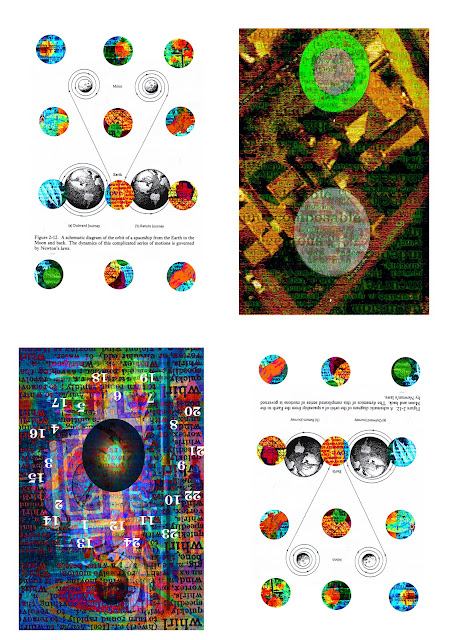 I then decided to make it smaller put it on one quarter of the page. Because the moon is hiding inside two of the images I went back to a diagram of Newtons Law and gravity as the pull of family is very strong. There are two diagrams and each has 12 small circular digital images representing an hour. These were taken from an earlier complete image called Love. I'm not totally satisfied with the paper or the surface, I would have preferred to output it on a watercolour paper, but time and ink supplies were against me. 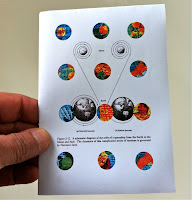 I do like it when it is folded. It's a bit like a coded diary that could be carried in a pocket, kept close and pondered about. I enjoy the scientific diagrammatic look as well. If you found it on a street, would you wonder what it meant?

Because some parts are upside down when unfolded I sent two versions, one that reads the right way up when opened out. Friday morning packing bags, whirling round, trying to relax, artwork and applications in the post, me in the car and off to Derbyshire!