As a child family days out, often involved visiting historic sites, stately homes, roman ruins, collections and curiosities. The Romans certainly left a strong imprint on this country and made a huge impression on me. Even today I can’t resist a Roman bathhouse with fabulous mosaics and under-floor heating, this is not surprising as I was often lulled to sleep with tales of “What I did at work today” from my Dad, a former pipe fitter / heating engineer who loves everything about complex industrial heating systems. 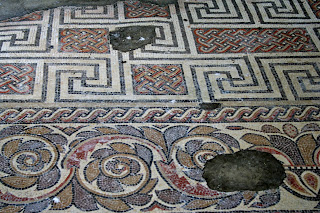 Mosaics at Chedworth in Gloucestershire
During a Millennium Project called Spirit of the Valley I found myself in Nether Heyford whilst they were conducting an archaeological dig, the archaeologists donated some actual roman floor tesserae to the Nether Heyford mosaic Millennium way marker. It was very surprising to see that they weren't square tiles but were more like lengths of clay carpet pile. 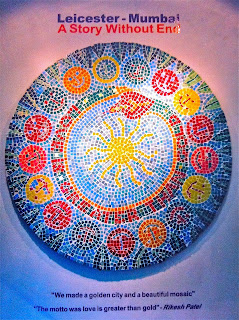 Through the years I have found that there is something completely compelling about mosaics, looking at them it’s easy to think you know how they work but as soon as you try making one you realise just how complex they are, just how many pitfalls you can stumble into! In my previous post I mentioned the Leicester- Mumbai project and my first mosaic – well I designed it and the children made it. It had to be simple because they were only 8 or 9, time and money was tight and I had no actual experience other than having read a wonderful book The Mosaic Workshop: A Practical Guide to Designing and Creating Mosaics by Emma Biggs and Tessa Hunkin

We worked using the reverse method and even though I’m a printmaker and know about reverse images and lettering, I forgot that the same principles applied to reverse mosaic making. I’d troweled the adhesive onto the board, the grout to the mosaics and sandwiched them together, when I realised my mistake. Thankfully I managed to cut away the lettering and reapply it before the adhesive set. That was a very long time and several mosaics ago but I still have huge amounts to learn and seeing or doing is the best way for me to learn. 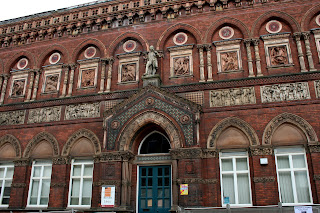 My partner comes from Stoke-on-Trent, (I love the way he says Burslem, Tunstall, Duck and Sweetheart) but long before we met, I’d started collecting domestic china and the Potteries Museum in Hanley remains a favourite haunt. On one visit I picked up a leaflet about the Made in England project, a mosaic involving the community devised by Emma Biggs, they were looking for volunteers. My heart raced, she’d written that book - we could have met, I could have taken part……….had I not found the leaflet months too late and I'm not sure that I would have counted as part of the community! However I followed the mosaic's progress, read about it on the project website and went to see the finished piece when it was installed. It’s wonderful!

Minster Nights took me to York when the Emma Biggs and Matthew Collings “Five Sisters" installation was at York St Mary's and once again I was bowled over by their work. 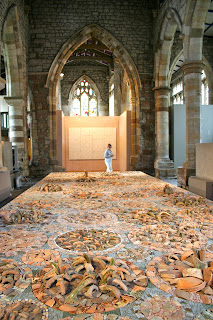 Recently I was lucky enough to take part in one of Emma's courses, AN INTRODUCTION TO MOSAIC: TEXTURE, REFLECTIVITY, SURFACE described below
“Texture in mosaic can be one of the most exciting, and beautiful properties of mosaic material, but it is tricky to use texture really effectively as there are so many issues at play. On this course, students will be taught the important strategies on which to focus, and how to do so to greatest aesthetic effect. Reflectivity and qualities of surface (granular, flat, sheer, rounded, sharp – for example) have to be considered and balanced to achieve a compelling design.” 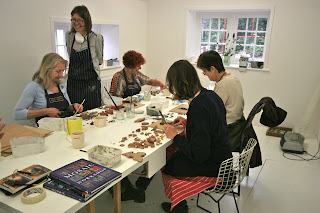 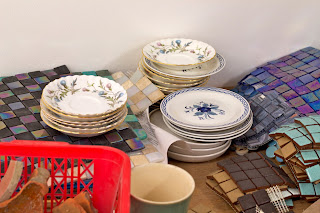 or the gorgeously coloured smalti 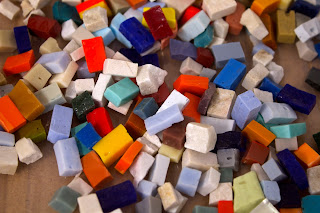 We were encouraged to look beyond the surface,
to notice that marble has many subtle shades 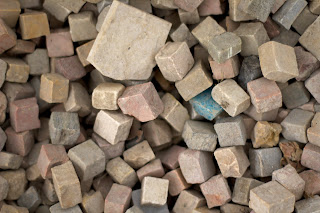 And when you break open a clay pot it’s amazing
to discover rich, unexpected colours and textures 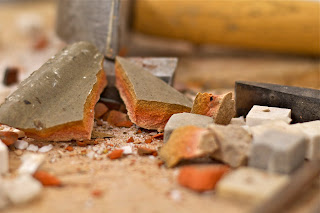 It also requires a huge amount of concentration. 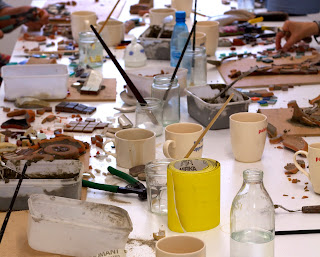 I began with simple circles, then cut my circle in half at an angle and couldn’t get Lyle Lovett’s ‘If I Had a Boat” out of my head, my semicircle spent the morning pretending to be a boat. I was trying hard to be abstract but the figurative would keep creeping in! 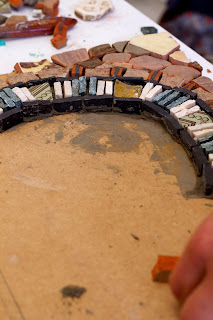 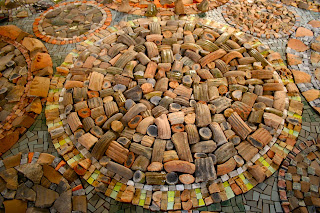 and other things you are thinking about, 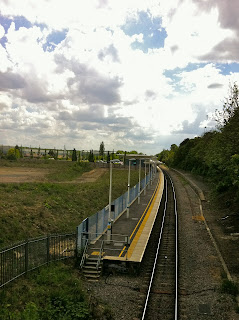 the boat shape later became a train track, well I have been spending a lot of time beside them lately 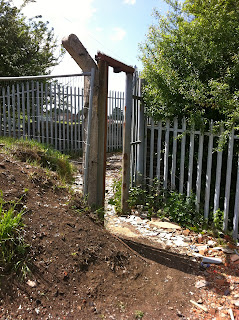 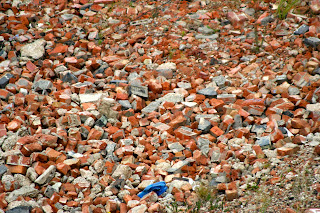 then lo and behold I found myself adding a tree 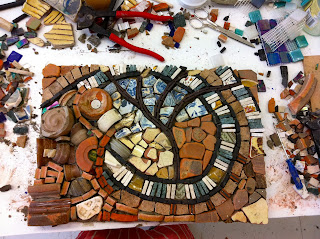 It took ages to resolve the middle, lots of umming and tutting and tea, before Emma rescued me by bringing out some blue and white pottery shards 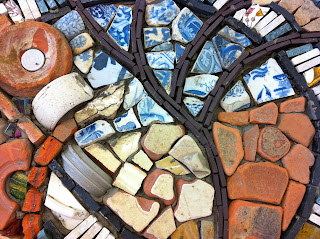 one of my favourite finds in the many boxes of shards was part of a cylindrical pot, you can see the imprint of the maker and the pressure of the fingers that shaped the base, such an assured, steady spiral. 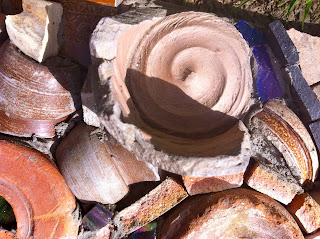 It was a wonderful course, with great tuitition, in lovely surroundings, good company, stimulating conversation, space for thought and careful deliberation, time, care and love! We all left wanting to make more.
You can read more from Emma on her Blog
Find out more about her work on her website
and her collaboration with Mathew Collings here
But if you get the chance, see the work in reality
or go on a course, you’ll be captivated too!
If you can't wait to get started here's a little link for some virtual mosaic fun.
Photographs from the course were taken by Mac Canonymous